An appeal court has said the monthly sanitation in Lagos state is illegal and no one should be arrested for moving around during such days. This came after a woman was arrested foe moving during a sanitation day on 2013 in Lagos.
Here is what we found on L.Ikeji’s blog

“The Appeal Court in Lagos has described as illegal the monthly environmental sanitation exercise held in the state. Delivering judgment in a suit filed a resident of the state, Faith Okafor against the Lagos State Government (Respondent) over the weekend, Justice Ugochukwu Ogakwu of the Court of Appeal said their was no law written in the state that validates the restrain put on members of the public not to leave their homes between 7am to 10am as instructed the state government during any of the monthly sanitation exercise.The court ruled that the order given to residents of the state not to leave their homes within a stipulated time is unconstitutional, illegal and unlawful.Faith had dragged the state government to court after she was arrested and charged before a special court for moving about during environmental sanitation on May 25th 2013.The court in its ruling, restrained the Lagos State Government and its affiliates from further arresting the anyone whatsoever on the basis of a purported environmental sanitation offence or trying anyone in the Special Offences Court without conforming to the dictates of the Constitution.Part of Justice Ogakwu reads“I have arrived at the inexorable conclusion that the appeal is meritorious. The same succeeds and is allowed me. The Ruling of the lower court in Suit No. M/548/2013: FAITH OKAFOR vs. LAGOS STATE GOVERNMENT & ANOR. delivered on 1st July 2014 is hereset aside. In its stead and for good order sake, judgment is hereentered for the Appellant against the Respondents in the following terms:

It is heredeclared that the arrest and detention and transportation of the Appellant in the back of a vehicle which is of a metal cage with very little ventilation and light “Black Maria” officials and/or agents of the 1st Respondent (KAI Brigade) on 25th May 2013 for a purported environmental sanitation offence violates the Appellant’s fundamental rights to respect for the dignity of her person, personal liberty and freedom of movement as provided under Sections 34, 35 and 41 of the Constitution of the Federal Republic of Nigeria, 1999, as amended, and is therefore illegal and unconstitutional.”

Chinagorom Adibe Fustine , who drowned after a skidded off the the road and plunged into Mekwe river, Lagos, was pregnant. 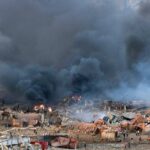