Adesanya, the Spokesperson for the Nigerian air force said the security agent has established another security post in Taraba to curtail security challenges and bring security closer to the people.
He said this via Twitter. Read his tweet below:
“@NigAirForce has deployed its Special Forces to the newly established Quick Response Wing Nguroje, Taraba State, as part of expansion plan the Nigerian Air Force to bring security closer to the people.” 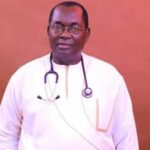