He also faulted federal government’s branding of the Indigenous People of Biafra, IPOB as a terrorist group, noting that it was wrong in the first place for the federal government to have sent soldiers to commit mass murder in Igboland.

Chidoka made the statements at Enugu sports club, yesterday when he addressed Anambra citizens residing in Enugu on his blueprint for development.

He suggested that the south east states should aggregate forces to establish a coal power plant, adding that Gas-powered plants are costly power generations model which cannot be sustained under the present price regime which he said was cheaper than the production cost. Chidoka said that the November 18 governorship election is to determine the future of Ndigbo and Anambra state in particular. “We will manage Anambra to produce human resources,” he said.

He pledged that if elected Governor of Amanbra s tate, he would make Internally Generated Revenue, IGR, of the state, greater than the federal allocations for the state. “I am the only candidate discussing how to turn around Anambra state. My role is to take Ndigbo, Anambra to a higher purpose. My vision is to build a world class model state in Nigeria. “I wand to run a transparent based government driven Ndi-Anambra aspiration. Our strategy is to play in the digital economy, reform core values based on knowledge, vision, execution and sustenance,” Chidoka pledged. 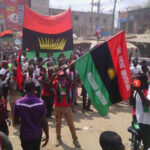