Just today Wednesday 24th May the Nigerian Air Force via a statement released said they have commenced investigations into the alleged invasion of UNIOSUN its personnels.
Though lots of  unknown sources have said that the air force men, who had been terrorising students of the University for a long time, armed with guns, cutlasses, sticks, arrived on the campus in patrol vehicles and Armoured Personnel Carriers and beat up lecturers and students.
Read statement issued NAF….

“The attention of the Nigerian Air Force (NAF) has been drawn to reports of some of its personnel being involved in a fracas on the campus of the Osun State University (UNIOSUN) at Ipetu Ijesha. While the NAF highly regrets the entire incidence, it is noteworthy that the reported incidence is not a reflection of what the NAF stands for.
The NAF is a highly professional force that does not condone or encourage the violation of anyone’s human rights. The general public is invited to kindly note that the NAF has already commenced formal investigations into the reported unfortunate incidence. At the end of the investigations, Nigerians are assured that any NAF personnel found culpable will be dealt with in accordance with the appropriate laws.”
Tagged: News

Kashim Shettima appointed Yakubu Nkeki, the Chairman of an association of the Chibok schoolgirls’ Parents as councillor of Mbalala ward in Chibok local government 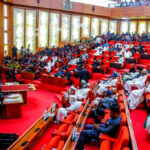 APC shuts down official website after it got hacked