The
Chief of Defence Staff, Gen. Abayomi Olonisakin has assured that the
Nigerian Armed Forces is at the forefront in ridding criminal elements
with a view to restoring normalcy back to the country.
Speaking
during the graduation of 106 Direct Short Service Cadets held at the
Military Training Center in Kaduna yesterday, the CDS challenged
officers and men of the Nigeria Air Force (NAF) to remain loyal,
disciplined, dedicated and patriotic in their assignments.
He
told the cadets that the service would not compromise on discipline and
patriotism, adding that they must gear up to be part of the efforts to
restore peace in parts of the country.
“You
must at all times, subordinate yourself to constituted civil authority
and protect democracy. Indeed, you must remain absolutely loyal to the
President and Commander-in-Chief of the Armed Force of the Federal of
Nigeria.
The
security situation in the country was largely caused criminal vices
which directly or indirectly provide impetus to the existential threat
posed insurgency and terrorism. A lot has been achieved in degrading
the capacity and capability of insurgents and terrorists, much however
needs to be done to achieve the level of peace and security we desire
for Nigerian people.”
The
Chief of Defence Staff told the cadets that, “Your commissioning into
the service should therefore be regarded as part of government’s efforts
to restore normalcy. It is imperative to state that your decision to
choose military profession must be one borne from the desire to make
sacrifices because of your love to our country.”

He pledged that the Federal
Government would continue to provide the resources required for the NAF
to perform its statutory responsibilities.
The
Chief Air Staff, Air Marshall Sadiq Abubakar, said NAF would continue
to build on the capacity of its personal, to produce a very proficient
and mobile attack force.
Source: Daily Trust
Tagged: News 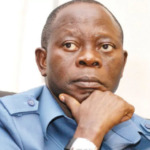 Alex Iwobi nodded into his own net to deny his club, Arsenal the maximum points