House of Representatives is in the process of passing a law to prevent the United States from extraditing Mr. Buruji Kashamu, the senator representing Ogun East Senatorial District, who is wanted in the United States for drug running.
This move is contained in the National Assembly Journal of October  20, 2017. The journal indicates that the House of Representatives is considering a bill for the amendment of the Extradition Act 2004. The bill is sponsored Mr. Solomon Ahwinahwi and sources told Saharareporters the bill is headed to the Senate where Senators are anxiously waiting to pass it into law.    Sought for Incorporation into the proposed law is a provision stating that “where a claim of mistaken identity is raised a Nigerian citizen, who is the defendant in an extradition case that has been concluded in any of these countries, including Nigeria, hearing held in accordance with the provisions of this Act, the court shall dismiss the application for extradition order and accordingly order the defendant discharged”.

Mr. Kashamu, who has been in the sights of US authorities since the 90s, has consistently claimed that the man being sought for drug running was a deceased younger brother of his with whom he shares close resemblance.
The proposed law also seeks to have it inserted a provision that states that a defendant shall not be arrested, interrogated, detained, charged or convicted “where no evidence is led the plaintiff or the requesting country to satisfactorily rebut the claim of mistaken identity, as raised the defendant, or where judgment has not been appealed or set aside within two years, or a case that has been concluded way of judgment in any country that shares extradition treaty or similar extradition laws with Nigeria”.
Mr. Kashamu was cleared a British court on the grounds of mistaken identity, an outcome considered unsatisfactory US authorities. The House of Representatives amended Section 15 of the principal Act inserting a paragraph stating: “No Nigerian citizen surrendered to Nigeria in accordance with the provision of this section shall be arrested, detained, extradited, proceeded against or otherwise dealt with in Nigeria or any other country within the Commonwealth or country that has same extradition agreement with Nigeria if the proceeding relates to (i) an offence for which he has been previously convicted or acquitted in the requesting country for which extradition is sought the Nigerian authorities;
(ii) no appeal is pending or has been initiated against the acquittal or conviction of the Nigerian fugitive the requesting country within two years of his acquittal, or (iii) any person that has been exonerated as fugitive cannot be extradited”.
In its explanatory memorandum, the House stated that the bill seeks to amend the Act to prevent double jeopardy, provide procedural safeguards against the extradition of Nigerian citizens with cases of mistaken identity. This invariably is a boon to Mr. Kashamu, whom a US District Judge has ordered his extradition for drug running.
Source: Sahara Reporters
Tagged: News 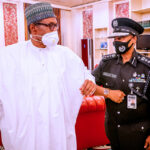 The morale of many police officers has been seriously dampened now because of the rampant killings of officers”- Acting IGP, Usman Baba, laments