A military plane carrying carrying Sudanese Judges and Army officials crashed on Thursday January 2, 2020 shortly after taking off from an airport in Sudan’s West Darfur.

Though what caused the plane crash is still not known, however it reportedly occurred about 10 km (6 miles)from the airport. An official at el-Geneina airport said there were about 18 people on board and they were all killed in the plane crash.

Army spokesman Amer Mohammed al-Hassan who confirmed the incident, told AFP that among the victims were seven crew members, three judges and eight civilians, four of which were children.

El-Geneina, the capital of West Darfur which has received security reinforcements and visits senior officials this week, has seen deadly clashes between ethnic groups in recent days.

Sycophant, Sycophant, Where Have You Been? I’ve Been to London to See Buhari! : A funny but touching article Reno Omokri 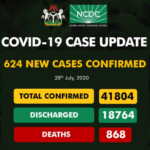