Yesterday Sunday, the Governor of Borno State, Kashim Shettima spoke publicly about the negotiated freedom of 82 abducted Chibok schoolgirls. Read the statement below…

First of all, I will like to thank Allah subhanahu wa ta’ala for securing the lives of our abducted daughters and schoolgirls‎ from Chibok. I also thank God for giving strength to their very resilient parents in the Chibok community and for guiding our President, Muhammadu Buhari and our military. I want to place on record our very profound gratitude to Mr President for his sincerity in making the freedom of our daughters one of the topmost priorities of the APC administration. The President has since proved his overriding commitment after the first set of girls were freed. I am sure many Nigerians were surprised this negotiated freedom of over 80 schoolgirls.

This cheering news came at a time many critics thought the President wasn’t at work. If there is one thing Nigerians must learn from this joyful development, all Nigerians must believe that in whatever circumstance, President Buhari has this country at heart and he works round the clock to address critical national problems such as we have seen in the successful freedom of our daughters and also in the sustained fight against the insurgents. That the Buhari administration, alongside international and local humanitarian partners, was able to negotiate the release of these girls at a time the administration stepped up battle against the insurgents is an extraordinary record of achievement that very few leaders around the world could have achieved.

We must reaffirm our trust and confidence in the President and we must as Nigerians, thank God once again for giving us a leader that is sincere, a leader that is focused on his set goals and a leader that everyone believes he is very patriotic. Negotiations leading to the freedom of these girls could not have succeeded if Buhari lacked integrity. The reason is because international actors who helped in facilitating the negotiation, would certainly not have been involved if they had doubts about the integrity and sincerity of the President. It is also Buhari’s integrity that has made it possible for our gallant armed forces to be more equipped than ever and it is his integrity that has made countries in Africa, Europe and the United States to support Nigeria in the ongoing and so far, successful fight against the Boko Haram insurgents.

Of course, everyone recognize that it is the work of the military and multi-national joint task force and volunteers that have placed the Federal Government in position of strength to negotiate the freedom of our daughters and schoolgirls.

I want to salute our gallant military, members of the multi-national joint task force for their efforts in freeing these girls and in their progressive efforts to free Borno from insurgents. I want to pay special tribute to parents of these girls who suffered unimaginable trauma of going to bed and waking up without their daughters for over three solid years. As a father of two daughters, I imagine what it means to know that either or both of my biological daughters lived in the hands of insurgents for these years. As Governor of Borno State, I lived with the kind of pains that these parents lived with because I know they looked up to the me as their first leadership responder. I know the pains of being a Governor whose hundreds of young, adorable and promising female citizens were violently abducted while in a Government school and writing exams organized Government.

I salute the resilience of these parents. More than the parents, I salute the courage of these girls who witnessed the naked jaws of death but yet persevered for three years until more than half of them secured freedom. I thank all men and women of good courses who have supported us, particularly those who have kept the Chibok schoolgirls matter in the front burner. ‎No matter what we think or make of the Bring Back Our Girls campaign group, the group has kept the need for rescue of these girls alive. I believe it was for this reason that the Federal Government invited them for a tour of the Fallen Sambisa Forest some months ago.

I will like to call on all Nigerians, particularly our friends in the media, to cooperate with federal experts that would have the task of counseling and rehabilitating these girls. The full rehabilitation of these girls should be our collective priority. We should put their rehabilitation first before our understandable search for news insights. The Borno State Government will always be committed in whatever way necessary to partner with the Federal Government in the full rehabilitation and the education of these girls. The freedom of these girls has renewed our hope and strengthened our faith in the commitment and capacity of the Buhari administration to continuously work towards the freedom of our remaining daughters that are still in captivity.

With very strong empathy, I urge parents whose daughters are not part of those freed so far, to keep their hopes alive and remain strong and prayerful. Like I have always said, no sane parent gives up on a missing child, we will never loose hope in getting back our remaining daughters alive. I thank ‎members of the local and international media for standing the Chibok community and for standing Borno. It is my fervent prayers that all persons abducted the insurgents will be freed, the fight against Boko Haram will be worn and Borno will witness enduring peace and prosperity. 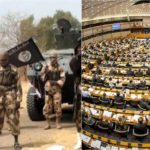 There’s no progress in the fight against Boko Haram – EU

Music Alert: “Who did it? Jesus Oh My God” KCKingz is out finally. Download, enjoy and share