In continuation of his on-the-stop assessment of the fuel situation in parts of Lagos, Vice President Yemi Osinbajo,yesterday paid a visit to fuel depots in Apapa area of Lagos State.
During his visit to Oando and Total depots in Apapa, Lagos, VP Osinbajo, reassured Nigerians that the Buhari’s administration was working round the clock to end the fuel crisis as soon as possible. He said that one of the most important objective of the Buhari administration is to ensure that the average Nigerian citizen is not again put through the pain of an increase in fuel price.
The Vice President, alongside the Honourable Minister of State for Petroleum Resources, Dr. Ibe Kachikwu, also held a closed-door meeting with oil marketers in Lagos in a bid to resolve the issues involved with supply of fuel nationwide and clear up the queues at filling stations.
“We have been here holding a meeting with major oil marketers and as you see everyone is at work trying to ensure that the petrol queues are cleared. We are trying to look at some of the issues and what needs to be done to ensure that things move very quickly,” the Vice President said.
He added “just yesterday, Mr President tried to see how exactly he could really work on the problems that we are experiencing and how to very quickly clear up the queues and ensure that everyone is able to have a happy holiday; that’s exactly why we are here today.
“The GMD of the NNPC is up in Abuja and I’m here with the Honourable Minister (of State for Petroleum Resources), trying to take a look at what the problems of the marketers may be and also what other issues there may be getting the products to petrol stations across the country.”
“We had a very good meeting and we hope that in the next couple of days we will be able to resolve the petrol queues and l hope this rather sad episode come to an end as quickly as possible.” 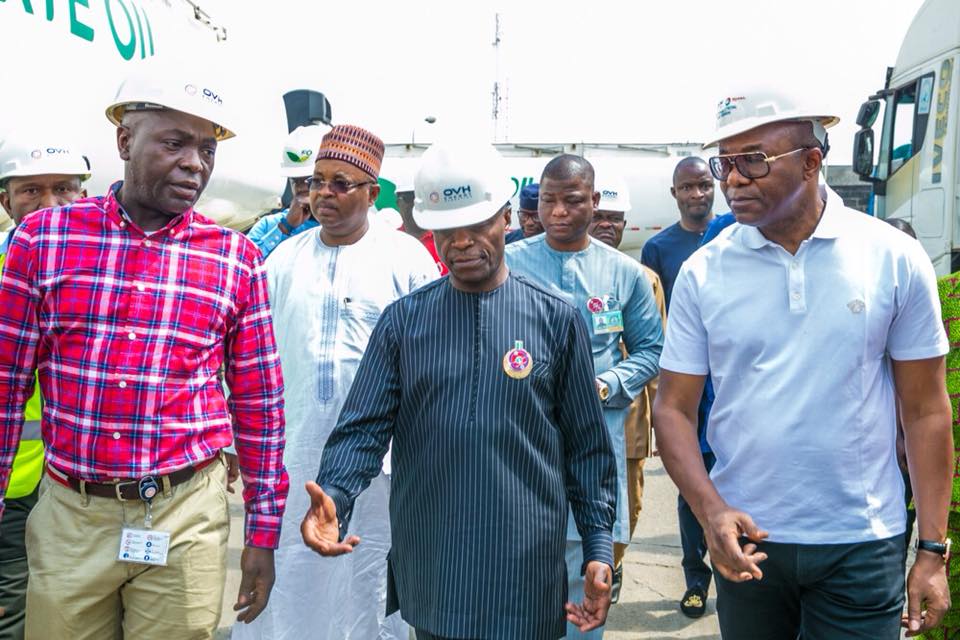 It would be recalled that the Vice President made an unscheduled stopover at two filling stations in Lagos on Christmas Eve. During the stopover, he assured Nigerians of the Buhari administration’s resolve to end the fuel crisis as soon as possible.Following his visits to the fuel depots today, the Vice President spoke with journalists in Lagos. Below is the transcript of the interview.
Q: On the major issues causing fuel shortages, especially in the Yuletide season.Vice President: I think that part of the reason why you find these disruptions at the end of the year is because of what we described as this winter phenomenon, where prices of petroleum products go up in the winter month in many parts of the world, obviously because of the places where we are getting the PMS from and the situations out there at this time. Obviously that gives rise to problems of those who are bringing in fuel, and we had one or two short deliveries on account of some of these problems.
So clearly, what has happened here is that on account of some of the short deliveries that we have experienced, panic buying, hoardings in different places started. So those are largely the issues. So we are also trying to ensure that these sorts of disruptions won’t happen in the future and that’s one of the reasons why we are spending a bit of time to look at some of the issues.
There’s a premium on products. That’s what it usually would happen at the end of the year, but if you notice it didn’t happen last year at all. We had a very smooth December 2016, there was no disruption whatsoever; it all went very smoothly. So we can actually take care of those situations. It is when you have a problem, a disruption that you usually would find the hoarding. That’s what you are seeing today, we are seeing a bit of hoarding and the DPR has been going round the stations trying to regulate that and, in some cases, have to close down the stations and force the petrol stations to continue to sell.
So really all that can be done is regulation, and more enforcement the DPR, which is what the DPR has attempted to do. But l think the ultimate solution is to have adequate supply going everywhere. Once you have adequate supply everywhere, the hoarding and disruption will stop.
Q: On rumours on social media about a possible increase in the price of fuel.
Vice President: We are certainly not expecting to increase oil prices at all; the government has absolutely no intention of increasing fuel prices and that’s it.
Q: Shortfall in supply and NNPC as sole importer of petroleum products could not sustain supply, the unavailability of Forex, what are you doing?
Vice President: First let me explain that you are right because NNPC is doing most of the importation. But don’t forget that NNPC also relies on the independent marketers and, in some cases, the IOCs, to bring in the fuel. NNPC itself does not go and do the deals, as it were. So, it really does lie on the marketers to bring in the fuel on a contract basis.What the independent marketers would rather do is to bring in their own products. So that is another issue, because we have to look at the pricing and we have to be sure that we are able to deal with the issues of pricing.
I think that over time, in fact if you look at the past few months, NNPC has been importing and they have been doing a very good job because we didn’t have a shortage in October and November, it’s only in December that we had a disruption. So, l think it is fair to say that NNPC did a very good job of its importation all the way up to when we have this winter disruption.
But, of course, in the long term, we are going to be reviewing some of these issues and we are going to take a look at how it is that a better balance can be struck. I think the fair thing to say though is that all the way up to the past couple of weeks, NNPC has done an excellent job, and they were actually importing most of the products.
I think that obviously we have to keep fine-tuning and reviewing to be sure that we are doing the best that is possible in the circumstances. But l think that for government, one of our most important objectives is to ensure that the average citizen is not again put through the pain of an increase in fuel price, that’s a very important objective for government. And we have to keep creating that balance, and we will ensure that we create that balance.
Q: On cost of fuel subsidy.
Vice President: Obviously, if NNPC bought, the NNPC bears the cost today. NNPC is trading in fuel; the Federal Government is not, at the moment, paying for any subsidy. NNPC is trading. If you are buying and selling fuel, you would have to be able to pay for it. So, it’s not a question of government provision for subsidy, the Federal Government, at the moment, isn’t paying any subsidy, but NNPC is trading. If NNPC buys fuel at certain cost. And don’t forget that the way that the NNPC trades is that, in many cases, NNPC is actually giving fuel, there is 445, 000 barrels of fuel. So really what you are seeing in many cases is more or less an exchange for PMS. So at the moment NNPC is paying the cost.
Source: L.ikeji
Tagged: News