Former Ekiti state governor and Deputy National Chairman (South) of the
All Progressives Congress (APC), Segun Oni has come out plainly to say that  if he was a supreme
court judge, he would have arrested former Rivers state governor now
Minister of Transport, Rotimi Amaechi.

He disclosed this while reacting to claims two of the
arrested judges, Justices Sylvester Ngwuta and Justice John Okoro, that
Amaechi when he was still governor, approached them with bribe so they
can influence the election petitions results of some state elections.

While he was speaking to some journalists yesterday, Oni said if the Supreme court
judges were indeed upright and not corrupt, they would have ordered the arrest of
Amaechi immediately he approached them with bribe.

Here is part of his speech

“I am not in the position to defend Amaechi, but I feel very very sad. I
am very sad that a justice of the Supreme Court could come up much
later to say somebody attempted to bribe him. If I am a justice of the
Supreme Court, that person would not spend another week before he is
arrested. So, because it is a crime, if you see somebody committing
crime and you keep quiet and now you are talking about it, do you want
people to take you seriously? It’s like somebody saying I saw somebody
committed rape last year and I didn’t do anything about it. I don’t
think that sounds wise. I am not exonerating anybody and there can be
investigation.”Oni said 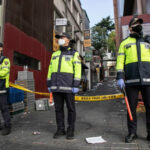