Shortly after submitting the report from the investigation committee on the allegations of fraud leveled against suspended Secretary to the Government of the Federation SGF, Babachir Lawal and the Director General of the National Intelligence Agency NIA, Ayo Oke, Vice President Yemi Osinbajo who chaired the committee, spoke with state house correspondents. He refused to give any information regarding the suggestions made the committee, adding that he cannot tell if heads would roll following the recommendations the committee had made in the report.

Babachir was investigated for the alleged irregular contracts he awarded while serving as chairman of the Presidential Initiative for the North East PINE while Oke was investigated for the large sum of foreign exchanged found in an apartment in Ikoyi which the NIA is laying claim to.
Continue to read the transcribed question and answer session Osinbajo had with newsmen after submitting the report…
Q: Your Excellency, you have just submitted a report Nigerians have been eagerly waiting for, to know the details, can you give us a brief of what is contained in your report?
Vice President: No of course not. This is a report which contains recommendations to the President. The fact finding committee as you know and what our terms of reference were, were to find out based on the facts available to us and to find out based on interview of witnesses and what transpired in both cases that were before us. The one involving the Secretary to the Government of the Federation and the one involving the DG NIA. And we have now concluded that and we submitted a full report with recommendations to Mr President. Of course I cannot give you any kind of details because the President has to look at, study the report and then make his own decisions based on that report.
Q: Sir, one thing Nigerians would also want to know is if we are going to get something fair coming out since he is one of you, are you going to look at it from the angle of justice or from the angle of a close friend?
Vice President: Well I think that as you can imagine that we are always fair minded and the whole approach is to ensure that justice is done in all cases. It is in the interest of the government and also in the interest of the nation that things are done properly, that there is due process in anyway.
That’s is the proper thing to do and you can be sure that we will do the right thing.
Q: How soon are we going to get the President’s report because Nigerians have waited so long for your report? Are we going to wait for another 3 months or can Nigerians expect it soon?
Vice President: All I can say is that we have now submitted a report to Mr President. It is a detailed report, two reports as a matter of fact and Mr President has to study the report and then make decisions.
Q: Sir please give us details?
Vice President: Oh I cannot tell the recommendations. How can I? This is a document which we have just presented to Mr President. He is the one who will read the recommendations, read the facts in the recommendations and then make a judgement. But I cannot, but I said that we cannot do that. That would be pre-emptive of me.
Q: What did Mr. President say to you after you gave him the report?
He said thank you very much well done.
Q: Are heads going to roll from your report?
How can I tell you what is in the report. You really want to know what is in the report! You really have to wait.
Tagged: News 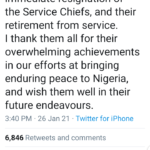 Trump and the rest of Americans watch eclips… (Photos)