A policeman and a businessman identified as Ifeanyi Ozoka, were killed during a clash between hoodlums in Minna, the Niger State capital.

The gang fights which are common within Minna are usually between youths of different areas and have led to the loss of lives and properties.

Security personnel were able to quell the clash which started on Thursday, January 20, between the youth of Limawa and Ogbomosho areas.

On Friday morning, they regrouped and disrupted the Minna central area, dispersing business owners who had to lock their shops and scamper to safety.

According to Punch, one of the traders whose shop is located along Ogbomosho Road was stabbed during the clash and later died in the hospital.

There are conflicting reports on how the policeman died. While some said he was mistakenly killed his colleague, others said it was the clashing youths that killed him.

The policeman was said to have been among those drafted to the area to control the clash and protect other citizens.

Gang clashes have become frequent in Minna, making residents and commuters live in fear as the fights occur on major roads with the hoodlums fighting with stones and knives.
Residents usually get attacked, injured, have their goods stolen while windshields of cars get shattered in the course of such fights.

Restructuring in whatever shape or form, will not mean much if our political leaders see public resources as an extension of their bank accounts. – VP 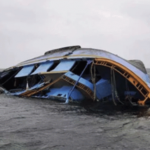