Former Vice President Atiku Abubakar at the
weekend met with Adamawa PDP executives at all levels, as well as state
chairmen from the six states that constitute the North East, including
the National Vice Chairman (North East) of the party.

Atiku had hours after dumping the APC on Friday relocated to
Yola, the Adamawa State capital where he was consulting with various
interests groups.

Commenting on the meeting between Atiku and
the state executives of the PDP in Adamawa, the state Secretary of PDP,
Alhaji Abdullahi Prambe, said the meeting was fruitful.

“Our meeting with him has been fruitful and from his body language he will soon return to PDP,” Prambe said.

He further said that it would be a big boost to the party at the state and national levels when Atiku finally returned.

“With Atiku, the party will carry more weight and more people
will also troop in,” Prambe said. When contacted on the development,
Atiku’s spokesman, Mr Paul Ibe, declined comment.

On Friday, the former vice president said he dumped the APC
because it had adopted arbitrariness and unconstitutionality that led to
factionalisation.

The Wazirin Adamawa said he had joined the ruling party because
of the promise made those who contacted him that the injustices and
failure to abide its own constitution which had dogged the then PDP
would not be replicated in the APC.

The former vice president said nothing had been done to reverse
the treatment meted out to those invited to join the APC on the strength
of a promise that had proven to be false.

Atiku joined the APC on February 2, 2014, after the PDP had
become factionalised as a result of the special convention of August 31,
2013.

Before the 2007 general elections, the former vice president had
earlier dumped the PDP for the Action Congress (AC) to contest the
presidential poll which he lost to the late President, Umaru Musa
Yar’adua.

He later returned to the PDP to contest the 2011 presidential
ticket with former President, Goodluck Jonathan: he lost the ticket to
Jonathan.

Though the Wazirin Adamawa did not disclose his next political
party in his resignation statement, Daily Trust learnt that he would
return to the former ruling party, the PDP, before the December 9,
elective national convention.

The former vice president, it was gathered, is already working to
get the PDP presidential ticket ahead of the 2019 general elections.

The Adamawa State chapter of the APC, through the  state
Secretary, Alhaji Saidu Nera,  had confirmed the receipt of Atiku’s
resignation from the party.
source: Daily trust 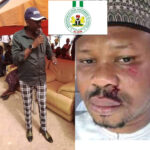 Gidan waya in crisis along Abuja and jos road. Its happening NOW… please share to save lives.