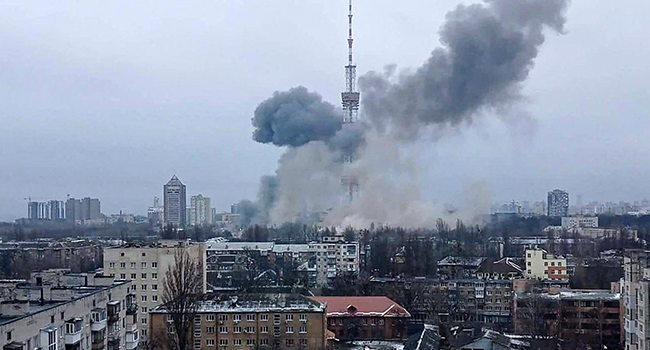 An apparent Russian airstrike hit Kyiv’s main television tower in the heart of the Ukrainian capital on Tuesday, knocking out some state broadcasting but leaving the structure intact.

After a blast sounded around the city and smoke was seen rising in the Babi Yar district, the interior ministry said equipment had been damaged and “channels won’t work for a while”.

A photograph distributed the interior ministry showed a thick cloud of smoke billowing from part of the tower, but AFP journalists with a view of the scene could see it still standing.
The interior ministry said that back-up systems would be put into operation to restore programming.

Earlier, the Russian defence ministry spokesman had said that Moscow’s forces would hit technological infrastructure in Kyiv “to suppress information attacks on Russia”.

But the targets he cited — the SBU security service and the army psychological operations unit — did not include the civilian-run television tower in the capital.