Senator Shehu Sani has released a press statement saying, he will hold Kaduna state governor, Nasir El-Rufai, responsible should  anything that happen to him or any member of his family. He released the statement today after days of his suspension from his party APC on his ward in Kaduna. Here is the statement….

“Some few minutes ago I received a report that some heavily armed thugs raided and attacked my constituency office located at Stadium Roundabout constitution Road Kaduna.They unleashed terror on my Social media team whom where meeting in the office.They vandalized the office in their violent act.
We have the lead and the information that Thugs were fully recruited and paid political appointees of Governor Nasiru Elrufai. We have the names of the political appointees and we have the names of those they are funding.Right now their details are given to the Dss and the police for investigation.

Two days ago attempt to burn down my Family house in Alkalawa Road,Tudun Wada Kaduna,sponsored thugs was thwarted vigilant residents and neighbors,which led to the brief deployment of policemen in the area.
I wish to state it categorically clear that I hold Governor Nasiru Elrufai personally responsible for whatever happens to me or any of my family members or supporters.After the use of financial inducement on APC Excos in the state to silence Shehu Sani in the name of suspension,which never worked,they have now taken the road of violence.
The Governor of the state or his desperate political appointees should know that we can NEVER ever be silenced,coward or intimidated.I call on my supporters NEVER to take the road of violence or retaliation.
We are men of ideas,of ideals and of peace.Those who take to the road of violence have no place in a democratic society.
Thank you”
Tagged: News 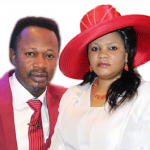 Wife of Abuja-based Pastor Iginla breaks silence, denies having a love child while they were married