According to reports, Federal Government yesterday said staff of some agencies are yet to get November salaries because they had exhausted their budgetary allocations since October.

The Minister of Finance, Kemi Adeosun told State House reporters after the Federal Executive Council (FEC) meeting that the affected agencies had more staff than the budgetary allocation.
This is what she said….. 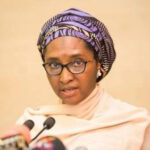 The level of Nigeria’s borrowing is not unreasonable and is not high – Finance Minister, Zainab Ahmed

I will lead the war if Igbos are touched. – former Abia State Governor