– I am best networks gathered that the Labour Union chapter of NIPRD Idu Abuja  said enough is enough today as it held a protest today in the premises of NIPRD Idu Abuja. The protesting party were in the front of the gate singing solidarity songs.
They complained that the DG was careless about the happenings in NIPRD as it had no internal security, no gardeners, some arrears were not paid to staff nor people who could clean up the place. The DG who didn’t come on time but when he came, he said he was on top of the situation. The DPO of Idu police command who was there pleaded with the staff to discuss things diplomatically with the DG. Though it was a peaceful protest today but the NLC asked staff to go home. The DG was ones listed for compulsory retirement but it was rumoured that he contacted the president through his God father and the retirement was averted.

– Finally, The Nigerian police has sent more police men to Kaduna were there was crisis. This was done to promote peace and cause normality in the society 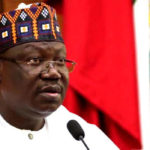 “We passed President Buhari’s $5.5b loan request to save 20m jobs” – Senate President cries out

We must not allow those who brought the country to its kneels from 1999 to 2015 to come and take us back”. – President Buhari tells PDP