South African president, Jacob Zuma who was recently honoured with a huge statue the Imo State governor, Rochas Okorocha has been given till November 30, 2017 to defend the corruption charges against him in his country.
The National Prosecuting Authority (NPA) told Zuma yesterday that it will only consider new representations on why he should not face corruption charges the said date.
This comes after the Supreme Court of Appeal (SCA) earlier this month dismissed an application Zuma and the NPA to appeal a High Court ruling that the 2009 decision to drop 18 corruption charges against him was irrational. The charges related to Zuma’s alleged involvement in the country’s multi-billion rand arms deal.
NPA spokesperson Luvuyo Mfaku detailed the timeline for Zuma’s possible prosecution, including that he has until November 30 to make representations as to why the prosecuting authority should not charge him with corruption.
“The NDPP (National Director of Public Prosecutions) is of the view that, in light of the judgment of the SCA, it appears that any further representations envisaged Mr Zuma should relate to issues not previously considered,” Mfaku said in a statement.
On April 6, 2009, then-NPA head Mokotedi Mpshe said recordings of telephone conversations between then-Scorpions boss Leonard McCarthy and former NPA boss Bulelani Ngcuka showed political interference in the decision to charge Zuma.
Source: L.Ikeji
Tagged: News

About 600 employees sacked Aero Contractors Ltd. in March yet to get their severance packages. – NUATE

Mdee will be at Tuning Session: Read to know more about him 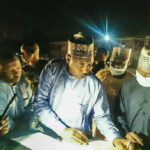