Frank Lampard fears Chelsea will get permanently left behind if Roman Abramovich fails to match the spending power of Manchester City and United.

Antonio Conte guided the Blues to the Premier League title last season, but has been left unsatisfied with the club’s unwillingness to invest in the transfer market.

Meanwhile, the two Manchester clubs spent hundreds of millions on new talent in the summer and have stepped up to another level, leaving the defending champions rooted in third place.

And Lampard, who won three Premier League titles at Stamford Bridge, says it is a position in the table they may have to get used to unless their billionaire owner coughs up more cash.

He told The Sun: ‘Chelsea have the power to match them but it’s something they haven’t particularly done in recent years.

‘But other clubs are spending more and they have to be careful not to get left behind.’

If Chelsea fall significantly behind both Manchester clubs, the prospect of another Premier League title or any major trophy becomes bleak. That, Lampard believes, could convince their best players to leave the club, including Eden Hazard.

The Belgian’s contract does not expire until 2020, but the club have so far failed in their attempts to tie him down to an extension. Lampard says they will struggle to keep him unless they can prove their ambition.

‘If standards drop, of course questions get asked about your ability to keep your best players,’ he continued. ‘So you don’t want to get to that point and I don’t think it will happen at Chelsea.

‘Eden Hazard is the centrepiece of the club and has been the catalyst for their very good performances over the last 18 months.

‘Players will move on but hopefully not Hazard. Chelsea have to try to keep him and build the team around him.’ 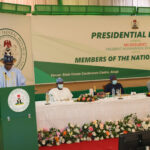 We must end insecurity with everything within our power – President Buhari