One of the World’s leading boxing promoters,
Frank Warren, has announced that the Nigerian boxer, Larry “The Natural”
would engage his opponent at the Copper box Arena in London.

The undefeated Ekundayo and former African boxing champion with a 12-0
record would be up against Corcoran with a career fight of 16-1.

“The Natural’’ has attracted major attention in Nigeria and across
Africa, as world Heavyweight Champion, Anthony Joshua, recorded a
special message requesting all Nigerians to support him in his
forthcoming fight.

Speaking from his training base in London, Ekundayo, thanked his management for organising the title bout.

“I am thanking my management team, MTK, for arranging this title shot
and for Frank Warren for giving me an opportunity to showcase my skills
in front of a global audience.

“I am thrilled to have the whole nation behind me; a bill was recently
passed the Nigerian National Assembly to support me and to bring big
time boxing back to Nigeria.

“If Nigerian boxers are supported correctly we can rule the world of boxing,’’ Ekundayo said in a statement on Friday.

The Natural and fellow elite boxer, Olusegun Ajose, were recently blessed the Ooni of Ife with further promise of support.

The Ooni had said that Nigerians in the Diaspora seeking to bring glory to their fatherland should be supported. (Daily Trust, NAN) 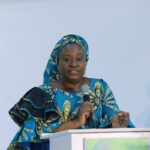 Father O’Connell, a Catholic Priest, in a tearful farewell embrace with Shaykh Ahmad Lemu, an Islamic Cleric, in Minna.