“The budget as passed the National Assembly has just been transmitted to the Acting President. I just delivered it. Let me use this opportunity to clarify an issue. The Acting President has the power to assent to the budget and he will assent to it when the processes are completed. The Acting President has the power to assent to the budget. In February, he assented to 7 or 8 bills. Those that he didn’t agree with, he wrote the Senate and House of Representatives that he had withheld his assent from them. He has the power of the president to assent to it. But the assent to the Appropriation Bill will be after the completion of the standard operation process. The bill has 30 days within which it will be assented to but the process can be completed within two or three days. So, it is not possible to say it will be assented to in so, so and so day or in two or three days. It’s upon the completion of the process that it will be assented to the president and the president here now is the acting president.”‎he said 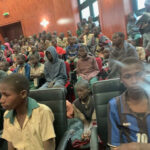