L. Ikeji has said Tennis star Maria Sharapova has had her two year ban from Tennis
reduced to 15 months the Court of Arbitration for Sports (CAS).

The
Russian tennis star tested positive for banned substance- meldonium in
January, and revealed in a press conference she was taking the drug for a
medical condition but her ban was widely expected to be reduced as the
debate around the drug meldonium continued to rage on.

Sharapova will now be free to compete again professionally in April 2017.
Tagged: Sports

the nation’s difficult business environment may make it difficult to sustain the current pump price of petrol. 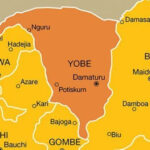