The
National judicial Council (NJC) has said that the arrest of 7 judges by
the DSS serves as a threat to the Independence of the Judiciary.

Daily Trust has reported that the
NJC in a press statement yesterday signed Soji Oye said it has
considered the action as an attempt the DSS to humiliate,
intimidate, denigrate  the Judiciary.


They said that it arrived at this decision at the end of its last Emergency Meeting which was held on 11th October, 2016.

The Council said that it vehemently denounces a situation wherethe
Psyche of Judicial Officers in the Federation is subjected to a level
where they would be afraid to discharge their Constitutional judicial
functions, without fear or favour, intimidation, victimization or
suppression.

The Council said that it will not compromise the integrity and impartiality of the Judiciary.

The Council reassured the public that any person who has a genuine
complaint against any Judicial Officer is at liberty to bring it up to
the Council for consideration, after following due process vide its
Judicial Discipline Regulations. 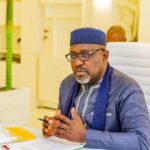 Trump orders full withdrawal of 2,000 US troops from Syria