We got this is article written Dr. Peregrino Brimah. Its elaborate and worth reading Please keep reading..
The Special Adviser to the Nigerian President on Media and Publicity, Mr Femi Adesina in his recent media conversations relating to the president’s absence made some pertinent utterances that unquestionably deserve elaboration in the interest of the nation.
Now before I go into the issues, I will like to state categorically that the media men, spokesmen and anyone else can feel free to insult me for my questioning the explanations of Buhari’s state of health and the severity of his condition as well as if he is alive and how closely he is hanging on to it. Buhari is not a mere citizen but the president of my country. His state of being is of ultimate importance to all Nigerians.
The secrecy with which his condition is being shrouded is a threat to national security and the most dangerous risk to our sovereignty; most especially when history is recollected.
Putting it frankly, Nigeria’s presidential spokesmen are liars, or as the media prefers to put it, they are dishonest or at war with the truth. On the 19th of January, Senate president Saraki read a notice from President Muhammadu Buhari that he will be commencing a 10-day annual leave to the United Kingdom.
Special Adviser Femi Adesina tweeted same, referring to the visit as only for 10-days and to include only “routine medical check-ups.” These were straight lies.

“PMB goes to UK today on short leave. He resumes on Feb 6. While away, he will do routine medical check-ups. VP Osinbajo acts as President.” – @FemAdesina

January 19 to February 6 is 18 days! It is not 10 days by any stretch of imagination. Neither in full days nor work days. It is 14 work days and 18 full days. This proves intent to lie. This is corruption. This is an insult to the collective intelligence of Nigeria and proves intent to manipulate the national conscience as well as efforts to falsify leave duration with implications that include falsely receiving renumeration for time away from work and deliberately putting the nation into confusion and devoid of leadership for the number of days during which the notice did not cover and assign the acting presidency to any one.

“Saraki read a letter from Buhari during plenary today, stating the Presidents Intention to be proceeding on a ten days annual leave vacation.”, DailyTrust published.

With the above recognized which proved that the information being fed to Nigerians was misleading at the least, it became a civic duty to ask questions and put forward honest suspicions on the true reason and plan for the president’s trip abroad. Nothing was beyond limits of questioning or insinuating. The presidential spokespersons’ words had to be totally rejected as they can not stand any tests of truth. Thus the labeling of the visit as a leave only to include “routine medical checks” carried no water.
Further, the presidential spokespersons continued to deprive the president of prayers due announcing that Buhari was alive and well. It begs reason why suddenly after the president announced his indefinite extension of stay, that the same spokespersons thanked Nigerians for our prayers? Who was praying? Only those of us who took the spokesmen’s words for lies, prayed for Buhari’s quick and full recovery. Those who believed the lies that came from their mouths when they insisted that all was well with Buhari, did not pray for his recovery. The national danger posed such media men becomes obvious.

What Is “Test Cycle?”
To the topic in the caption. Spokesman Femi Adesina repeatedly told the Press that Buhari is completing a “test cycle.” I have conferred with several of my Medical colleagues. We are at a loss as to what a “test cycle” is.
We know of “chemotherapy treatment cycles,” which refer to stipulated times at which drugs, radiation and other therapeutic modalities are administrated to chronically ill cancer patients. We know of “tests,” which are given upon a patient’s visit to a medical facility. But “test cycle?” Is this a new word or brand new medical terminology? Based on the precedence of lies form the presidential media men, “test cycle” is more likely than not, a lie and manipulation of the truth to deceive Nigerians and put the nation at further risk.
The media spokesman in failure to perform the duties for which he is paid handsomely, did not mention how and when he spoke with the president or the hospital and how he got the information he relayed to Nigerians that included the novel word, “test cycle.” Was it phone? Was it Skype? Was it text? Was it a video call? Did he speak with the president, an aide or the hospital?
It is sad and depressing to see that while insults are easy for Buhari’s “arrogant” spokesmen to dish out, they cannot do their duties and ridicule national intellect with utterances and attitudes fit of motor-park touts. And this puts it mildly. These are matters of serious concern.
Nigeria has a history of a similar event where the truth of the health condition of our president was concealed for very long and this lead to serious issues in the nation as a tribalised sector of Nigerians held the nation down while attempting all forms of manipulations and obtaining sworn and signed statements “to not contest” and what not, that kept Nigeria down and dysfunctional not just for the interim period but for the next four years. Nigerians should rightfully be anxious and deserve more honest answers on the actual and factual state of health of the president towards determining if he must step down.
Our acting president is also challenged to step out of Buhari’s manipulator sinking boat and tell Nigerians the truth that it is our right to know. How is the president? What is wrong with him? Is his condition acute; acute on chronic; chronic or terminal? Where is he being treated? These are not secrets except in a third world nation bent on moving in reverse. Perhaps there are contributions Nigerian minds and prayers can make towards his full recovery, apart from the importance of us knowing in national safety and progress interests.
Importantly, few disagree that the acting president does not have real powers. I would like to ask: the letters purportedly clearing SGF Babachir Lawal and EFCC’s Ibrahim Magu of wrongdoing, written and sent to the senate on Monday after Buhari had handed over power to Professor Yemi Osinbajo, were written who?
How and in what state did Buhari purportedly write these letters? How can Buhari write to clear these appointees while Professor Yemi Osinbajo is the acting president who Buhari has rescinded his powers to?
What other deals and transactions especially involving Nigeria’s oil fields and the like are being signed the cabal at the presidency while Osinbajo is the so-called acting president, possibly being denied overview?
Nigeria is at grave risk right now. We demand a full notice of the president’s actually health condition. It is our right to see his medical record and this must come from certified physicians. We demand a moratorium of all major transactions and decisions the federal government until and unless acting president Yemi Osinbajo’s total control of power without intimidation is confirmed.
While we do know that there are quite enough Nigerians who will not protest no matter what and will eat nails if fed to them by Buhari or Buhari’s men; and they will stand him in life and even defend his carcass’ right and ability to rule if he is unfortunately pronounced dead; enough Nigerians are not of this stupefied, lickspittling class. And the smart Nigerians cannot be hoodwinked, intimidated or cowed.
There are not 170 million idiots in this land. We did not campaign for president Muhammadu Buhari to be treated like idiots and taken for a ride. The word “idiot/idiotes” means one who is not concerned and engaged in the affairs that govern his life/governance. It will do the presidential spokesmen well to recognize that idiots we are not. We demand the truth.
#ShowUsOurPresident!
Dr. Peregrino Brimah; @EveryNigerian
Tagged: News

Poor Nigerians have started receiving N5000 each as promised Buhari 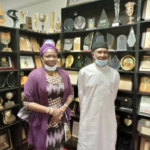