President Trump is planning to meet Pope Francis despite their previous long clash in 2016. In a press briefing on Wednesday, White House Press Secretary Sean Spicer told reporters: ‘Obviously, we’d be honored to have an audience with His Holiness.’

In response, Archbishop Angelo Becciu told the Italian news agency ANSA that ‘Pope Francis is always ready to receive heads of state who request an audience.’
It could be recalled that their feud began in February 2016, when Pope Francis planned to make a trip to pray with migrants along the U.S. border with Mexico. Then-presidential candidate Trump implied Mexico was using Pope Francis as a pawn and said, ‘I think that the pope is a very political person,’ the New York Times reports.
Days after, Pope Francis clapped back in a response to a question about Trump’s plan to build a border wall and deport undocumented immigrants.

‘A person who thinks only about building walls, wherever they may be, and not building bridges, is not Christian,’ Francis said. On Trump’s accusation about him being ‘political’ with Mexico, he said, ‘Aristotle defined human person as ‘animal politicus.’ So at least I am human person.’

And on whether American Catholics should vote for Trump, he said, ‘I say only that this man is not Christian if he has said things like that. We must see if he said things in that way and in this I give the benefit of the doubt.’
Criticizing Pope’s statement, Trump said:

‘If and when the Vatican is attacked ISIS, which as everyone knows is ISIS’s ultimate trophy, I can promise you that the Pope would have only wished and prayed that Donald Trump would have been President because this would not have happened.’ 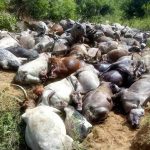