The India Police authority last Friday October 14th arrested two Nigerians named Nduba
Joseph (25years) and Nwite Sunday Rose (32years), for alleged drug trafficking. About
50g of cocaine worth was recovered from them after they were arrested at
their apartment in Indiranagar.

The accused reportedly confessed that they used to get cocaine from
their contact, identified as Mr Ben from T.C. Palya, and sell it. The
police have seized their passports and remanded them in judicial
custody. Efforts are being made to arrest their accomplice called Ben. 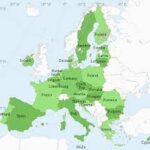