First case of coronavirus has been confirmed at the Vatican days after Pope Francis tested negative for the virus which forced him to cancel a series of engagements last week due to an illness described ‘as a cold’.

Spokesman Matteo Bruni said the discovery was made on Thursday and that outpatient services in Vatican clinics had been suspended to sanitize the areas. He said its emergency services will continue, adding that the Vatican had informed Italian health authorities.

This comes after Catholic bishops in Italy confirmed at the bishops conference that Masses would not be held from Monday to Saturday in churches in the Lombardy, Veneto and Emilia Romagna region as well as in the provinces of Savona in the Liguria region and Pesaro and Urbino in the Marche region due to coronavirus.

Italy remains at epicentre of Europe’s coronavirus outbreak. So far 148 died with more than 3,000 confirmed cases of the disease. 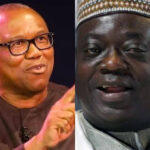 Nigerians are not ready for Peter Obi to be president in 2023, maybe 2027 Or 2031 – Ex Niger State Governor, Babangida Aliyu

Reconsider the on-going policy to rename our chiefdom to Chikun Chiefdom. – Gbagyis in Kaduna appeals to Elrufai