GPS (God’s Positioning System)
And the LORD turned the captivity of Job, when he prayed for his friends: also the LORD gave Job twice as much as he had before. Job 42:10

Have you ever felt Stagnat or stuck in life?  I don’t know about you but I’ve been through some very dark seasons. They’ve been times when I felt my life was bearing to wrong direction. I had a friend who is a surveyor, he travels alot, and as such he became accustomed to using GPS and most GPS devices have the ability to tell your location and also direct you to where you want to go. But he said to me that on one occasion, as he followed the GPS, he made a wrong turn then he noticed that the gps recalculated his route and said “in 70feet, make a U-turn.
Many people are in need of a similar turn around in their spiritual lives. Maybe the enemies have counsel you to lose focus or move in the wrong direction. Maybe you feel like h
Your life is absolutely out of control. Maybe you’re experiencing increased temptation because of the situation you are in or people you are with. Maybe you are a perfect candidate for total turn around!  If so, you can identify with Job.
Job lost everything he deemed valuable. His children died unexpectedly, sickness ravished his body, and his wife dismissed him. That was a terrible situation! However, God had a great plan. God has a way of turning your mess into a message and your misery into a ministry!  In the case of Job, the Bible records, “Job 42:10  And the LORD turned the captivity of Job, when he prayed for his friends: also the LORD gave Job twice as much as he had before. (Job 42:10)
The word trun in this passage means “to turn back or restore”.
Job was headed in one direction physically, spiritually and emotionally but God recalculated his route through his GPS(God’s Positioning System) and turned him around unto a path of blessings, favour, and prosperity. Job received double for his trouble. I believe God wants to do the same thing in your life,  if your life is not heading in the right direction, keep your eyes fixed on God’s Positioning System(GPS) for a divine U-TURN.

PRAYER: Father, I thank you for your faithfulness towards me.  Your plans for me and thought towards me are good to give me an expected end in Jesus Name.

PROPHETIC DECLARATION: I decree that every spiritual obstacle that stand before you is removed, and all spiritual resistance are neutralized in the name of Jesus.

WORD FOR THE DAY: God’s promise are spiritual certificate of deposit. 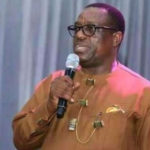