Beauty pageant or beauty contest is a competition that has traditionally focused on judging and ranking the physical attributes of the contestants, although some contests have evolved to also incorporate personality, intelligence, talent, and answers to judges’ questions as judged criteria like the Miss Gbagyi beauty pageant.

The largest beauty pageant is the Miss world. Nigeria has not been left out too in finding her Miss Nigeria. This is done annually and gifts are given to winners. Aside from Miss Nigeria which is a national contest, there are other ethnical beauty pageant and one of them is Miss Gbagyi. Gbagyi is a unique tribe in Nigeria(Nassarawa, Niger, Kogi, Kaduna, FCT) occupying about 5 states in Nigeria including the Federal capital territory Abuja. Gbagyi people are well known for their hospitality and calmness. The gbagyi nation for long have been a special and noticeable ethnic Nation because of their beautiful cultural values. Recently it has come up with a beauty pageant which started some years back but came into limelight in the year 2015  with Faith D Philip from Ushafa Abuja as winner. This contest have grown in a very short time.
Faith D Philip won miss Gbagyi for last year 2015/2016 and this year she gave the crown to Lovina Pambolo Sarki who on Friday 16th December 2016 Won miss Gbagyi @ Art and Culture Abuja.

Lovina pambolo Sarki, a tall beautiful chocolate in complexion young christian woman born in Kaduna  in the month of march 24th more than  21 years ago. She is not just base in Kaduna but she has her root and up bringing from Kaduna State, Kaduna South precisely in vicinities like Gonin Gora Kaduna. She attended Imperial School Kaduna and Joy international College Kaduna. She loves drinking tuwo, she loves Jellof rice too. She is part of Mega Holdings Africa. Aside Gbagyi, she speaks and understands English and Hausa. She is a sister to Peace Yusuf Sarki and Eli Yusuf Sarki.
More about her will be coming much more later.

From I am best networks, we say congratulations to her. We pray for grace so she can give her best in the  uplifting of the Gbagyi nation…. “Yagode nShekwoyi“
More photos of miss Gbagyi 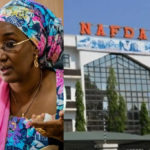