Read the press statement from Festus Keyamo, spokesperson of the Buhari Campaign Organization, below:

THE ILLOGICALITY IN PDP’S REJECTION OF PRESIDENTIAL ELECTION RESULTS
We have just read with great consternation the Press Statement of the National Chairman of PDP rejecting the results as being announced presently INEC in Abuja.
The simple questions we ask the PDP and Atiku’s Campaign team are as follows:
(1) How come the PDP is rejecting results that have not been fully and completely announced? How can one reject the result of an uncompleted game? The process of an election does not end until the final collation and announcement of results. (2) Is the PDP rejecting the totality of the results nationwide? If yes, does it mean they also reject the results that would be announced later INEC which may indicate that they have won in certain areas? Are they also rejecting the results already announced that indicate they won in some areas? For instance, are they rejecting the results of the FCT already announced in which they won? (3) If indeed they are only rejecting areas where they lost, are they implying that it is only in areas where they won that can be adjudged free and fair and all areas where they lost must be adjudged rigged? Is that the mentality of true democrats? In the PDP statement, it is curious that they rejected the results as being announced, yet they claim they are coasting to victory. What kind of logic is that? What kind of confusion is now reigning in the minds of the top hierarchy of the PDP that they can spew such illogicality?
It is now obvious that the top hierarchy of the PDP is hysterical and nervous. We urge them to calm down.
Obviously, this is the first time they are sensing a massive loss of an election as opposition party. It is a new experience for them. They are confused and disoriented. For many years, they were used to manipulating the instruments of State to just write results and announce themselves as winners. As such they have a sense of entitlement to these instruments of State that they could not fully manipulate this time because President Muhammadu Buhari insisted on a level plain field for all.
We advise the PDP that as opposition party for many years, we have been down this road before. This is not the time to sacrifice the country for personal ambition. If they feel they have lost (as their statement clearly indicates), Alhaji Atiku Abubakar must pick up his phone to make that famous call to President Muhammadu Buhari. The world is watching him and so are Nigerians.
Finally, we urge INEC, Nigerians and our international friends not to be swayed these infantile antics of the PDP. The process of collation and announcement that is on-going should be done to its logical conclusion after which anyone who is aggrieved should take full advantage of the provisions of the law. 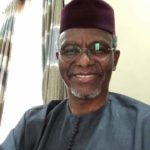 Just In: “…After nearly four weeks of observing a strict medical regime, I have now received the all-clear after two consecutive negative test results says Governor Nasir Elrufai as he recovers from covid-19

House on the Rock Church in Abuja today engulfed fire