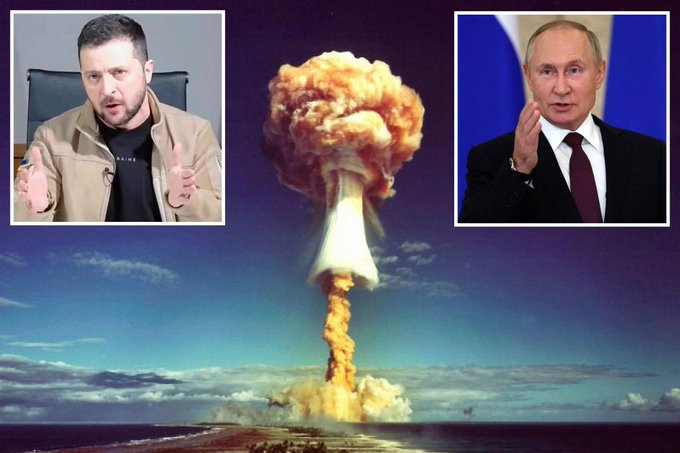 Russia has issued a stark new nuclear warning to Ukraine and the West on Tuesday as Russia began releasing results of referendums ahead of Vladimir Putin’s announcement of annexing four Ukrainian regions.

Tuesday’s nuclear warning Dmitry Medvedev, deputy chairman of Russia’s Security Council, is one of several issued Putin and his associates in recent weeks.

Medvedev predicted that the NATO military alliance would not directly enter the Ukraine war even if Moscow struck Ukraine with nuclear weapons.

“I believe that NATO would not directly interfere in the conflict even in this scenario,” Medvedev said in a post on Telegram on Tuesday, September 27.

“The demagogues across the ocean and in Europe are not going to die in a nuclear apocalypse.”

Diplomats believe the nuclear sabre-rattling is an attempt Moscow to scare the West into reducing its support for Kyiv hinting at using a tactical nuclear weapon to defend the annexed territories of Ukraine.

But an adviser to Ukrainian President Volodymyr Zelenskiy said Kyiv would not be swayed nuclear threats or the annexation votes, and would press on with plans to retake all territory occupied invading Russian forces.

Zelenskiy’s adviser Mykhailo Podolyak brushed aside the comments, telling Reuters in an interview: “We will continue our work to de-occupy our territory regardless.

“We believe the war can only end when we have liberated our territory in the internationally recognised borders of 1991. We have no other scenarios,” he said.

Podolyak said the world’s nuclear powers should warn Russia that any use of strategic or tactical nuclear weapons in Ukraine would be met with concrete action.

Russian-installed officials in the four occupied regions of Ukraine reported huge majorities on Tuesday in favour of becoming part of Russia after five days of voting in so-called referendums that Kyiv and the West denounced as a sham.

The head of the upper house of the Russian parliament said the chamber might consider the incorporation of the four regions into Russia on Oct. 4.