A portion of the newly erected US border wall fell into Mexico on Wednesday January 29, after high winds in the afternoon.

Though no one was injured in the incident, it was however learnt that panel from the wall located at Calexico, California broke free from their concrete foundation which was yet to set in, before leaning against trees adjacent to Mexicali, Mexico.

US Customs and Border Protection Agent Carlos Pitones who spoke to CNN, said the sections which fell off had recently been set in a new concrete foundation.

“We are grateful there was no property damage or injuries.”

Pitones who didn’t disclose when work will resume at the border, said the local Mexicali officials diverted traffic from the area of the accident. The agency is working currently with the Mexican government on the next step for erection of the wall.

The US border wall is part of President Donald Trump’s signature policy to reinforce and extend the physical barrier diving Mexico from the US. His original ambition of erecting a full new barrier along the entire 1,954-mile border has been repeatedly scaled back.

It’s time to redirect some of the money the world spends on weapons to prepare for a looming threat: – Bill Gates 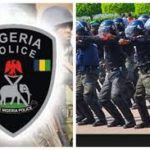