The Convicted sex offender and former Sunderland footballer, Adam
Johnson, has been told to convert to Islam Muslim criminals in prison
for protection, it has been claimed.

The British player was offered protection Islamic inmates after
several other convicts allegedly threatened to slash his throat.

In helping him with protection, the Muslim gang said the 30-year-old must convert to Islam as part of the deal.

Sources have told the Daily Star that Johnson has been spotted praying but has yet to join the religion.

One source said: ‘At first he was unwilling to take up the offer
because he thought he was going to get a transfer out of Moorland, but
that’s a non-starter.

‘Now it looks like he is having second thoughts because he doesn’t
have any friends who are tough enough to watch his back and prison can
be a very lonely place if someone is out to get you.’

Johnson is said to have pleaded to be moved from Moorland Prison, in South Yorkshire, but his request has been rejected.

The former Manchester City winger was found guilty of sexual activity
with a 15-year-old fan and was sentenced to six years in prison in
March 2016. 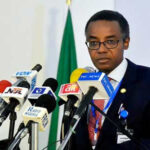 PTF on covid-19 disburses N1bn each to 32 states