News reaching us that the Nigeria Army has recovered 21 additional bodies in an operation to rescue oil exploration crew abducted the Boko Haram insurgents in Borno.

The Brig. Gen., Sani Kukasheka, Director Army Public Relations, who disclosed this in a statement released on Saturday, July 29, said he regrets earlier press release about the rescue of all NNPC Staff.
Read the Full statement below:


The incident of 25th July 2017 where some Boko Haram Terrorists ambushed our troops including members of the Civilian Joint Task Force (CJTF) escorting some staff of Nigerian National Petroleum Corporation (NNPC) as well as that of University of Maiduguri (UNIMAID) on oil exploration in Borno Yesu District of Magumeri Local Government Area of Borno state is unfortunate and highly regrettable. Most regrettable also is my earlier release on the said incident about the rescue of all NNPC Staff.  The error in the statement was not deliberate.
The Nigerian Army in this present dispensation is reputed for timely dissemination of information on activities of our troops in all theatre of operations. We have strived to keep the public informed on our activities with no intention of distorting any fact. Our troops have doubled efforts in the pursuit of the Boko Haram terrorists while search and rescue is still on-going to secure the safe return of the remaining civilians.
So far the search and rescue team has recovered additional bodies of 5 soldiers, 11 Civilian JTF and 5 members of the exploration team.
Contrary to reports in some media,  6 members of exploration team out of 12 that went out are still missing, while one of the NNPC staff returned to base alive.
On the other hand, our pursuit team also recovered 2 of our own  Gun trucks and an additional Toyota Buffalo Gun truck from the insurgents. In addition, the team also made the following recoveries; 4 Rocket Propelled Grenade Bombs, 4 Rocket Propelled Grenade chargers, 6 AK-47 rifles, 1 Anti-Aircraft Gun, 1 General Purpose Machine Gun,1 Anti-Aircraft Gun Barrel, 1 Rocket Propelled Grenade Tube, 4 Dane Guns, 8 Tyres and 2 Tyre Rims.
Other items recovered include 1 Pumping Machine, 2 Tyre Jacks, 1 Super Battery, 5 Reflective Jackets, 3 Toyota Hilux, 4 Jerry cans filled with PMS, 1 Motorola Radio, 1 Geographical Positioning System (GPS), 21 empty Jerry cans, 2 Shovels and 3 Food Coolers.  Troops also recovered 122 rounds of PKM ammunition, 213 rounds of 7.62mm NATO  ammunition, 1255 Anti-Aircraft Guns ammunition, 4 boxes of API 12.7mm ammunition, 1 AK-47 Rifle Magazine, a Digger, 2 Bows and 13 Arrows, 2 LLG Bombs, assorted drugs and assorted working tools.
The Nigerian Army condoles with the families of all that lost their loved ones in this unfortunate incident. Search and rescue efforts are on-going. We are counting on the goodwill and support of the populace in volunteering valuable information that could help in the search and rescue operation.
What the remnants of the Boko Haram terrorists are doing are pure criminal activities of kidnapping to gain funds. This has been noted and will be jointly addressed in conjunction with other Security Services.
The Nigerian Army remains resolute in the fight against terrorism and would not relent in its effort to safe guard lives of citizens, properties and the territorial integrity of the country.
Thank you so much for your kind support.
More photos below…

What do you think? Hate speech offenders to die hanging in Senate’s new bill 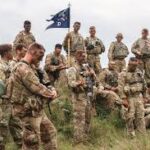 we condemn vehemently the unguided utterances coming from the Arewa Youths. – Young leaders of the South East