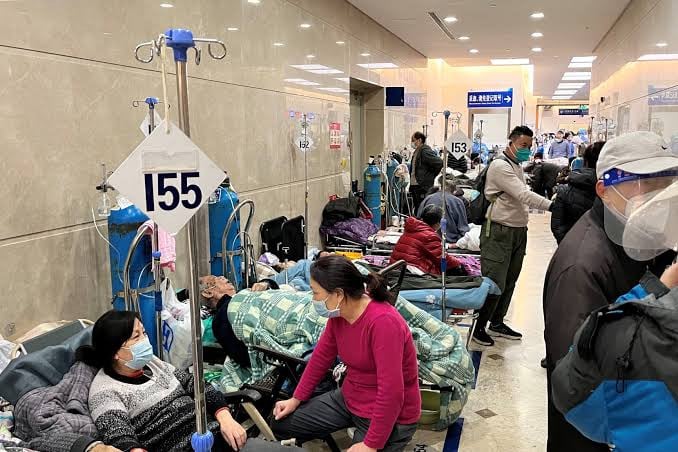 A senior World Health Organization (WHO) official has alleged that China’s official data is under-representing the true impact of the coronavirus outbreak in the country, criticizing its “very narrow” definition of COVID deaths.

More countries are imposing travel restrictions on visitors from China in the wake of a steep rise in COVID infections in the country. Hospitals and crematoriums are overwhelmed since Beijing last month abruptly lifted more than three years of hardline restrictions.

A senior doctor at one of Shanghai’s top hospitals said 70 percent of the megacity’s population may now have been infected with COVID-19, state media reported on Tuesday, January 3.

International health experts have predicted at least one million COVID-related deaths in China this year if no urgent action is taken.

Yet China has only recorded 22 COVID deaths since December and has dramatically narrowed the criteria for classifying such fatalities. It counts only those cases that involve COVID-caused pneumonia or respiratory failure – meaning that Beijing’s own statistics about the unprecedented wave are now widely seen as not reflecting reality.

“We believe that the current numbers being published from China underrepresent the true impact of the disease in terms of hospital admissions, in terms of ICU admissions, particularly in terms of death,” Mike Ryan, WHO’s emergencies director, told reporters on Wednesday, January 4.

Ryan pointed out that the definition Beijing is using “requires a respiratory failure” associated with a COVID infection for a death to be registered as a COVID death.

“That is a very narrow definition,” he said.

Ryan noted that, for the past three years, China has had some of the world’s harshest rules regarding COVID-19.

“The reality for China is that many countries [now feel] they don’t have enough information to base their risk assessment,” he said.

“We still do not have complete data,” he added.

The UN agency said it will meet Chinese scientists again on Thursday as part of a wider briefing among member states on the global COVID-19 situation.

Meanwhile earlier on Wednesday, WHO Director-General Tedros Adhanom Ghebreyesus reiterated that the agency is “concerned” about the surge in COVID-19 infections in China, urging Beijing again to deliver rapid and regular data on hospitalisations and deaths, as well as real-time viral sequencing.

“WHO is concerned about the risk to life in China and has reiterated the importance of vaccination, including booster doses to protect against hospitalisation, severe disease and death.”

China was forced to change its “zero-COVID” policy last month after protests erupted in more than 20 Chinese cities following an apartment building fire that killed at least 10 people on November 25. It was claimed that victims had been locked in their apartments as part of COVID measures, but authorities have said that was not the case.

Countries including the United States, the United Kingdom, France, Italy, Spain, India, Japan, South Korea and others have imposed restrictions on travellers from China.

plans the Federal government to categorize hate speeches as an act of terrorism, is a plot to silence the opposition. – Fayose