Nigeria vice president Yemi Osinbajo said that  Corruption is an existential problem for Nigeria and that those who stole from Nigeria while they were in power must be made to account for their actions. The Vice President made this remark when he spoke at the 10th Bola Tinubu Colloquium held in Lagos yesterday March 29th.

“Let me say that when we began this journey in 2014, and when I say ‘this journey’ I refer to our government, our party, the APC, was determined to change the dominant narrative about our country. We were determined to ensure that the notion of a country rich in all natural resources, but even richer in human capital, but being destroyed daily grand corruption, and the impunity in the looting of public resources; we had to change that narrative.
“As for our fight against corruption, we realized, as Mr. President said, that if we don’t kill corruption, corruption will kill us. Corruption is an existential problem for Nigeria. Let me pause here to reiterate that from all I have seen in government in the past three years, the corruption of the previous five years is what destroyed the Nigerian economy.“And the reason why we will talk about it is, first, we must let our people know that we cannot afford to go this way again. And this is the point we are making, that there is no country in the world, and we must know this; there is no country in the world that would allow its resources to be plundered in the way our own resources were plundered and expect to be economically viable; it is not possible. Nigeria is unlike any other country because of the level of corruption that was perpetrated. We must stop that corruption and that is why we are so committed.
“When you fight corruption the way we are fighting it, corruption is going to fight back. But we are determined. When you listen to the stories of these young people, when you listen to the stories of the vulnerable, the disabled, and all of these people, these are the people for whom we are responsible; these are the people who voted for us. We must ensure that we defend their rights, it is in the defence of the rights of these people that we will put everything out to make sure that those who have been taking the resources of this country are made to pay for it.”  he said 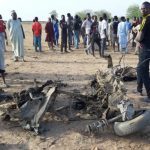 Nobody can unseat me- President Buhari tells CNN