We gathered that Ekiti State Governor, Ayodele Fayose, has asked the military to direct its “operations Python Dance and Crocodile Smile” to those areas in Nigeria, especially the North Central States of Benue, Plateau as well as North East States like Taraba and Adamawa where Fulani herdsmen are killings Nigerians and destroying farmlands worth several billions of naira.

The governor, who described the reported threat Miyeitti Allah Kautal Hore, a splinter group of Miyeitti Allah Cattle Breeders Association; over the Benue State Anti-Open Grazing Law as reckless and open threat against the sovereignty of Nigeria, added that the silence of the President Muhammadu Buhari led government over the Fulani herdsmen menace was a sign of complicity on the part of the federal government.In a statement in Ado Ekiti on Monday, his Special Assistant on Public Communications and New Media, Lere Olayinka, Governor Fayose said;

“If the Federal Government does not want to be seen as protecting the Fulani herdsmen, attention of the Army’s python that is dancing in the Southeast and crocodile that is smiling in the Southwest and South South should be focused on the killer herdsmen.”

“The moment a state governor begins to raise alarm as done Governor Ortom, those playing ostrich to the Fulani herdsmen menace should know that they can no longer pretend that all is well.”


Accusing the federal government of always looking the other way
whenever Fulani herdsmen attack and kill Nigerians, Governor Fayose said;

“However, the same federal government that responded swiftly when local farmers in Taraba State confronted the Fulani herdsmen, leading to casualties from both sides; never responded in such a swift manner to previous attacks carried out the Fulani, even when villages of the locals in the state were sacked.

“Within just 48 hours of the clash between the Fulani herdsmen and the local farmers in Mambila Plateau, the Taraba state police commissioner moved in, army battalions moved in and a military surveillance helicopter was dispatched. This did not happen when herdsmen were committing genocide against the villagers in Agatu in Benue State, Southern Kaduna, Kogi, Ekiti, and Delta States.

“Are we now to believe that it is only when Nigerians choose to defend themselves against the killer herdsmen that the federal government will act swiftly?

“Like I have maintained, pastoralists do not have rights to destroy other people’s farmlands, invade homes and rape people’s wives and daughters? Rather, people who are into cattle farming should be able to provide feeds for their animals and the federal government must not be seen as protecting the interests of the herdsmen against those of other Nigerians” 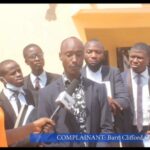 Video: How 3 police men terribly harassed and detained a lawyer in Niger state!

An earthquake of 7.9 hit Papua of new Guinea