Report reaching us that Governor Ayo Fayose  has directed the immediate dissolution of the State Executive Council via his spokes person.A statement issued the governor’s spokesperson, Lere Olayinka, on Sunday July 2, 2017, directed the commissioners to hand over to the Permanent Secretaries in their respective ministries.  Read the statement ..
…

“All the former Commissioners are directed to hand over to the Permanent Secretaries of their respective ministries.

“The governor thanked the former commissioners for their service to the State and wished them well in their future endeavours.” 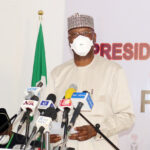