Emmykokz a rapper and a singer signed to 12tribez music who has featured lots of music stars and has also been featured lots of musicians like OkeySokey, Jared Daniels, Jclone, JDickson who is also known for his ELIC (Emmykokz Live In Concert) is set to take his long time engaged girl friend to the altar on 3rd December 2016. A close ally to this gospel musician who pleaded to remain anonymous told us that, the yet to be couples had almost broken up and it was as if Emmykokz almost left but thankGod they are both together and in few weeks time will be husband and wife. Here is their hot pre-wedding pictures a well known professional photographer Softlens… Watch the pix below 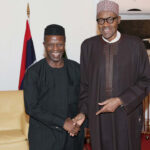 Finally, Buhari and Osinbajo to take Coronavirus vaccine on Saturday

Now that PMB has released another list of non-career diplomats without an indigene of FCT they are all quiet. None of them is saying anything – Chigudu Theotanko

What do you think about this photo? Transmission…..!!!