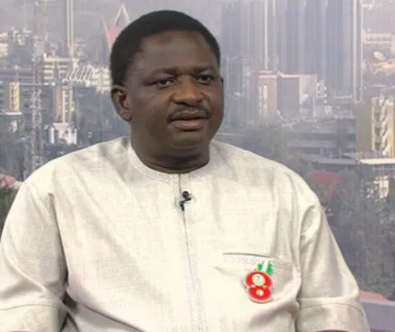 Femi Adesina, the Presidential spokesperson, says President Buhari recently nominated the immediate past service chiefs for ambassadorial positions as a reward for their outstanding performance in the fight against Boko Haram.

In an article posted on his Facebook page, Adesina said although the service chiefs did not totally win the war against the insurgents, they did their best and had their own victories. He opined that the service chiefs failed only in eyes of those who appreciate nothing, and don’t even know what success is.

Shortly after they were relieved of their job, President Buhari nominated them as non-career ambassadors-designate and sent their names to the Senate for confirmation. PDP and some other Nigerians have kicked against this move and said the President was rewarding the ex-service chiefs for their incompetence as insecurity was alarmingly high during their tenure in office.

Reacting to the criticism via his Facebook page, Adesina wrote

“Almost everything in our country is accompanied some sort of furore. You do, you are damned. You don’t do, you are damned. No wonder President Muhammadu Buhari often says in private conversations, when some tumults occur on certain issues: ‘Head or tail, you never win with some Nigerians.’ And he then smiles, to show that he has learnt to live with it.

That was what happened last week when the nomination of the immediate past Service Chiefs as non-career Ambassadors was announced. The ululation from certain quarters could almost pull down the sky. They claim the Service Chiefs failed. And these critics are people who will miss target if they attempt to fire catapult at an elephant. Poor marksmen!

But in came Gen Gabriel Olonisakin, Chief of Defence Staff, Lt Gen Tukur Buratai, Chief of Army Staff, Vice Admiral Ibok-Ete Ibas, Chief of Naval Staff, and Air Marshal Saddique Abubakar, Chief of Air Staff, and they gave the insurgents bloody noses. Drove them out of places they occupied, even went after them into their spiritual headquarters, Camp Zero, in Sambisa Forest, and took it from them.

The Service Chiefs did not make a clinical end of insurgency, banditry, and other criminalities in the country. But not for lack of trying. They did their level best, made huge advances, but the times were very difficult. Did they fail as in FAIL? Only in the eyes of those who appreciate nothing, and don’t even know what success is.

But President Buhari is not in that mould. He would not use people who did their level best, and dump them unceremoniously, so that they become objects of derision in the eyes of those who like to see people fall from elevated positions.

President Buhari nominated the immediate past Service Chiefs as non-career Ambassadors. And I say, bravo, Mr President. That is why we believe in you. That is why we have followed you through thick and thin, and will continue to do so, whether in or out of government. You are always faithful to those who serve you faithfully. You watch their backs, care for them, and that is why we believe. Yes, let everyone else be faithless, let them mock, but we believe,” Adesina said.

The former Service Chiefs did not end the insurgency, but not for lack of will. I remember when Buratai himself relocated to the front, in Northeast, and he said he would not return to Abuja till the war was over. Under his charge, the insurgents were killed in many hundreds. But they were like locusts. The more they killed them, the more they increased. Very uncanny. They were attacked from the land, the air, and from the waters (where possible). But hell had enlarged itself, and continued to spew them out. Quite preternatural.

The President would have wanted those Service Chiefs to go home as heroes. So he gave them time. Longer than was usual. And having realised that they had fought the war with all that was in them, he decided on some kind of reward, show of appreciation. Admirable. A display of good heart. No matter who you are; a President, a billionaire, Archbishop, Imam, if you don’t have a good heart, forget it. You should be avoided. Like a plague.”

“If they shoot you, take cover and shoot them.” – Kano state Governor

‘If I want, I’ll remain in the senate forever’ – Ekweremadu