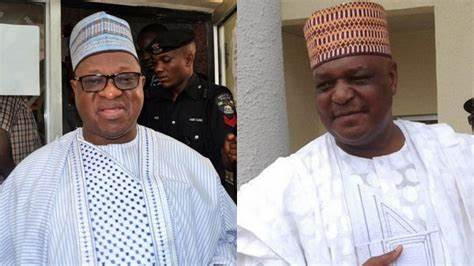 Former Governor of Plateau State, Senator Joshua Dariye; and Former Governor Jolly Nyame of Taraba State, who were both imprisoned for stealing N1.16bn and N1.6bn respectively, have been pardoned the federal government.

The former Governors made the list of convicts (159 convicts) who were pardoned President Muhammadu Buhari who presided over a Council of State on Thursday April 14.

Attorney General of the Federation and Minister of Justice, Abubakar Malami who spoke to journalists after the council of state meeting, said 159 out of 162 applications presented for consideration for the prerogative of mercy for convicts and inmates in correctional facilities nationwide, were approved.

Malami noted that the council rejected a proposal to grant pardon to one of the prisoners sentenced to 120 years for theft of over N25bn. The pardon, he said, was sought on health grounds.

“We are aware of your hardship” – President Buhari