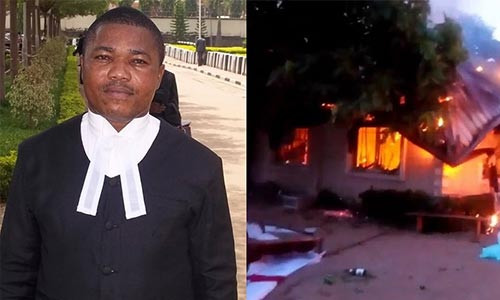 Ifeanyi Ejiofor, lead counsel of the leader of Indigenous People of Biafra, Nnamdi Kanu, has stated that a Federal High Court sitting in Awka, Anambra State, has awarded N50million to him, against security agents who invaded his home in Anambra state.

Ejiofor made the revelation on social media via his Facebook page.
The lawyer said “On the 2nd day of December, 2019, after the funeral ceremony of my elder brother- Late Rev. Chukwukpelum Louis Ejiofor, my ancestral home in Oraifite Anambra State, was invaded a team of Security agents comprising of the Nigerian Police, Army and others.

“Four persons were killed in my compound, and all the houses within my ancestral home including my brothers’ houses and neighbouring houses were burnt down on that fateful day.”

Ejiofor stated that the development forced him to file a fundamental human rights suit against the security operatives.

Ejiofor said the judgment has assuaged the “pains and trauma” he has been going through since then.

PDP chairmanship: I will not step down – Dokpesi