This is good news to Lagos. Ambode has paid a large amount of insurance to beneficiaries of deceased employees. Read below…
Lagos State Government, through its Pension Commission, LASPEC, has paid N170 million insurance benefits to beneficiaries of deceased employees. Director-General, DG, LASPEC, Mrs. Folashade Onanuga made this known during the 2016 Senior Citizens/Pensioners Day celebration, in Ikeja. Onanuga said

“Today, we are celebrating the beginning of your financial independence. Retirement Benefit Bond Certificates will be presented to a total number of 495 retirees. The amount that will be redeemed into the Retirement Savings account of the beneficiaries is N1.9 billion. Terminal salary.“

“The state government, through the Commission has paid to named beneficiaries of deceased employees, insurance benefit worth the worth the sum of over N114 million. She is set to pay another N56.1million death benefit today, bringing the total to approximately N170million.

“The insured death of 320 percent of the terminal salary of a deceased staff is designed Law to be paid to alleviate the immediate needs of the family members left behind.

“The Estate of a deceased staff is also entitled to receive the balance in the retirement account and accrued rights due, if the employee had joined service before the commencement of the CPS

“This feat is a clear indication that Contributory Pension Scheme is working perfectly well in Lagos State.”

She thanked service providers, Pension Fund Administrators, the Insurance Companies involved, and the staff for their commitment to the scheme.Onanuga also disclosed that at the moment, only programmed withdrawal benefit option is available pending the time, that Life Insurance Companies would open operational account jointly with Pension Fund Custodians, PFCs, to secure the Pension funds for the payment of annuity entitlements.She urged all beneficiaries to take very good care of their health, as well as desist from frivolous spending.She added:“Do not desire quick gains that would make you fall victims of fraudsters,”.The Chairman of Nigeria Union of Pensioners, Lagos Council and South West, Nojeem Ibrahim, commended the Lagos state Governor Ambode for his consistence in paying monthly salaries of workers and noted that since he assumed office, pensions have been paid regularly.He also said that Ambode paid the first three years arrears of 142 percent accrued pension when he was the Accountant-General of the state.He then made a plea to the Governor to make the payment of the remaining gratuities of all affected, especially the local government, primary school teachers and various parastatals. He also made a plea for the payment of benefits to Next-of-kin of affected deceased pensioners, harmonization of all pensioners in the state and construction of a befitting office of the state council of Nigeria Union of Pensioners.Source: Vanguard & L.Ikeji 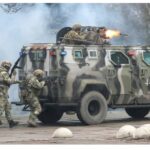 Ukraine/Russia tensions: Multiple nations tell citizens to leave Ukraine immediately as flights are banned from traveling to the country