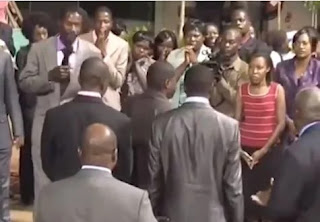 The video below shows the shocking moment, the founder of United Family International Church (UFIC), Emmanuel Makandiwa, exposed a congregant who had brought his mistress to church, while his wife and son were present in the house of God.

Pastor Emmanuel while prophesying to the wife of the man in Church, revealed to her that her husband was in church with another lady. When they both began to look for him, his husband in shame came out in front of the altar.
When the Clergy asked if he came alone for service, the disgraced husband confessed that he came with a companion. Surprisingly, the tearful mistress came out and knelt before the pastor who later ordered her up and told her to stand next to the man’s wife.
Pastor Makandiwa then asked the cheating husband to choose between his wife and mistress in front of the congregation. Without wasting much time, the man went for his wife, who was also there with the couple’s son. ????
Afterwards, the pastor asked the wife and the mistress to hug in church. He also suggested the mistress and the man delete each other’s numbers.
Watch the video below…
Tagged: News

A needy child abandoned at RCCG Redemption Camp his grandmother

Reps to investigate soldier sexual harassment, shooting of a 17-year-old girl in Plateau

Boko Haram is not defeated. It has not even been degraded.- Fayose