According to reports, the heavily-armed insurgents entered the community around 6pm when the villagers were returning from the farm and opened fire on residents. They killed many people and injured others.

This attack comes five years after the sect members abducted 276 girls from the  Government Girls Secondary School in Chibok. 112 of the girls are still in Boko Haram captivity while the others have been released the sect members.

The Nigerian Army is yet to speak on this fresh attack. 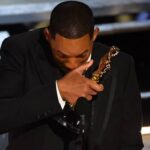 In tears, Will Smith apologises after slapping Chris Rock for making joke about his wife as the police reacts to the altercation

we have no plan to impeach Buhari – PDP senators