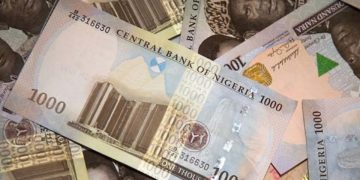 Naira gained significantly against the U.S. dollar at the parallel market on Tuesday, after crashing to an all-time low of N710.00 last week.

Currency traders in Abuja and Uyo said they bought the dollar at about N635 and sold between N640 and N645 on Tuesday, against N685 it traded in the previous session on Monday.
“The market surprised us today. A lot of traders closed up their shops due to losses incurred,” a currency dealer in Uyo, said.

He said at the opening of sales on Tuesday they were exchanging the dollar between N660 and N680 per $1 in the morning, but that it suddenly dropped to N630 and N635 to a dollar afternoon, forcing a lot of traders to incur losses.

“The demand for dollar was very low today,” he added.

Also, a currency dealer at the Abuja wuse zone 4, who identified himself as Aliyu Wireless, said the dollar was exchanged at N640.00 and sold at N645.00 per $1 on Tuesday.

It weakened by0.42 per cent to N430.67 per $1 on Tuesday from N428.88 it exchanged at the Nafex window in the previous session on Monday, data posted on the FMDQ website where forex is officially traded, revealed.
The currency climbed to a high of N415.00 and dipped to a low of N444.00 before closing at N430.67.
Forex turnover rose by163.3 per cent on Tuesday with $158.68 million posted against the $60.27 million recorded in the previous session on Monday.

UK could be forced to limit the intelligence it shares with the US on suspected terror plots if President Trump brings back torture.

My laundry man wore my jeans…. He is even helping me look for it – Timi Dakolo says