Former President Olusegun Obasanjo advised The president  to fix the country’s economy as he promised during electioneering rather than expressing frustration at the gloomy economic situation.
Speaking  during a lecture, Obasanjo delivered at the First Akintola Williams Annual Lecture in Lagos titled, “Nigeria yesterday, today and tomorrow: Governance and accountability.’’
He argued that it would have not been necessary for Nigerians to cry for a change of government if things were rosy in the country before Buhari took over. The ex-President also faulted the proposed borrowing of US$30bn the Buhari administration, arguing that such would amount to taking the soft option capable of hurting the country in future.
Besides, he cautioned Buhari against castigating his administration alongside previous ones, describing such as uncharitable, fussy and uninstructive.
According to Obasanjo, if the current administration does not fix the economy to relieve the pain and anguish of many Nigerians, the gains recorded in fighting insurgency and corruption will pale into insignificance.
Obasanjo stated, “It is easier to win an election than to right the wrongs of a badly fouled situation. When you are outside, what you see and know are nothing compared with the reality. And yet once you are on seat, you have to clear the mess and put the nation on the path of rectitude, development and progress leaving no group or section out of your plan, programme and policy and efforts. The longer it takes, the more intractable the problem may become. This is what he said

“I understand President Buhari’s frustration on the state of the economy inherited him. It was the same reason and situation that brought about cry for change, otherwise there would be no need for change if it was all nice and rosy. Now that we have had change because the actors and the situation needed to be changed, let us move forward to have progress through a comprehensive economic policy and programme that is intellectually, strategically and philosophically based.’’

He also warned that the anger of the citizenry particularly the youth might be spurred if the current administration did not get it right in good governance and accountability.
Obasanjo also warned the Federal Government against the planned $30bn foreign it intended to take.
He added that “We immediately need loans to stabilise our foreign reserve and embark on some infrastructure development but surely not $30bn over a period of less than three years. That was about the magnitude of the cumulative debt of Nigeria which we worked and wiped out 10 years ago.
“Before that debt relief, we were spending almost $3bn to service our debt annually and the quantum of the debt was not going down. Rather, if we defaulted, we paid penalty which was added on. Economy neither obeys orders nor does it work according to wishes. It must be worked upon with all factors considered and most stakeholders involved.
“The investors, domestic and foreign, are no fools and they know what is going on with the management of the economy including the foreign exchange and they are not amused. The Central Bank must be restored to its independence and integrity. We must be careful and watchful of the danger of short-termism. Short-term may be the enemy of medium and long-term.’’
Obasanjo took a swipe at the National Assembly, describing it as a den of corruption a gang of unarmed robbers and stinking worse than the judiciary.
He said, “Once you are a member, you are co-opted and your mouth is stuffed with rottenness and corruption that you cannot opt out as you go home with not less than N15m a month for a senator and N10m a month for a member of the House of Representatives. The National Assembly is a den of corruption a gang of unarmed robbers.’’
He said, “If the judiciary is being cleaned, what of the National Assembly which stinks much worse than the judiciary? Budget padding must not go unpunished. It is a reality, which is a regular and systemic practice. Nobody should pull wool over the eyes of Nigerians. Ganging up to intimidate and threaten the life of a whistle-blower is deplorable and undemocratic.’’
He also accused the National Assembly of using ‘so-called constituency projects’ as a conduit for corruption.
“These constituency projects are spread over the budget for members of the National Assembly for which they are the initiators and the contractors directly or proxy and money would be fully drawn with the project only partially executed or not executed at all. The National Assembly cabal of today is worse than any cabal that anybody may find anywhere in our national governance system at any time,” he said.
According to him, members of the National Assembly pay themselves allowances for staff and offices they do not have or maintain.
Stating that like the judiciary, the National Assembly cannot clean itself, he lamented how the re-current budget of the lawmakers with the so-called constituency projects had ballooned since the inception of the current democratic dispensation.
Obasanjo stated, “Our lawmakers are lawbreakers. They are the accused, the prosecutor, the defenders and the judge in their own case. Most of them conduct themselves and believe that they are not answerable to anybody. They are blatant in their misbehaviour, cavalier in their misconduct and arrogant in the misuse of parliamentary immunity as a shield against reprisals for their irresponsible acts of malfeasance and/or outright banditry.’’
The ex-President urged Buhari to ride on the popularity of current happenings in the judiciary to establish a highly technical team of incorruptible investigators to investigate the so-called constituency projects of the past and the present and bring culprits to book.
He faulted a situation where a person supposed to be screened the National Assembly for public appointment would be told to give a bow without any screening because he or she was an ex-lawmaker.
He added that such an action amounted to dereliction of duty on the part of the lawmakers.
He also urged the President to return the procurement system in the military to what it used to be.
Obasanjo further said three weeks after the process of saving the judiciary began, he learnt that there might be not less than two score of judicial officers having questions to answer.
The ex-President added that when justice was only for sale and could only be purchased the highest bidder, impunity and anarchy would be the order of the day and none would be safe.
Obasanjo stated, ‘‘There is virtually no corrupt judge without being aided a member of the bar. The Nigerian Bar Association has the responsibility to clean up its own house and help with the cleaning of the judiciary. It is heartening though that some members of the NBA have recently called for judicial reform. Such reform must be deep, comprehensive and entail constitutional amendments as appointment and disciplines of judges are concerned. It must also be said that the good eggs within the judiciary must be proud of themselves and we must not only be proud of them but also protect them and their integrity.’’
Obasanjo also commended “all the foot soldiers in the war against corruption – the different panels of enquiries, the ICPC but particularly the EFCC which is now showing that it is a bull dog that can bite.”
He  appealed  to the Judiciary not to frustrate the efforts of the anti-graft agencies “through flimsy technicality and interminable adjournments.’’
In another vein, he said though Akintola Williams was never in government, his contributions surpassed those of many others who passed through portal of government without much positive achievement or contribution to show for it.
Tagged: News 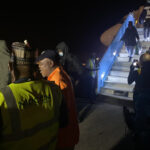 A child & 122 Nigerians have been successfully evacuated from Ukraine to Nigeria.

I AM BEST MAGAZINE: JUST ONE MORE HIT Shedy Elisha

Words in Pen: My Fantasy of Love Ishaya Bamaiyi