So sad that Cholera outbreak in
Lagos state, has klled six people and  authorities warn
residents that there might be further outbreak.The Commissioner of Health, Dr Jide Idris had said.
He said  the main suspected sources  of the epidemic
is the salad called ‘Abacha’, a staple food of the residents of Isolo
LCDA and adjourning LGAs/LCDAs and  some domestic wells.
He said 26 reported cases of cholera in the state
were managed at General Hospital Isolo and Lagos Mainland Hospital
respectively.
He said the government has identified the three vendors of the contaminated food at Cele Bus Stop and banned the sale.
The commissioner also said that Lagos State has
distributed factsheets on cholera to the Medical Directors of the state
teaching hospital and Lagos state General Hospitals whch are Medical Officers of Health in all the 57 local governments areas, LGAs for circulation to all health workers in their facilities.
Hello iambestnetworks famly if you dont wana have cholera then you must do these :
constant washing of hands with soap and water thoroughly especially
after using the rest room, disposal of waste materials appropriately
among others.
Tagged: News 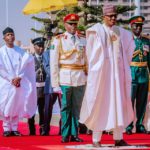 DEMOCRACY DAY: What APC said in message to Nigerians