President
Muhammadu Buhari has urged the military and the police to halt the
reprisal attack herdsmen in Plateau State, saying “this madness has
gone too far.”
Buhari, in a statement on Monday
his Senior Special Assistant on Media and Publicity Malam Garba
Shehu, said he received with deep sadness and regret, “news of the
recent killings of at least 20 people in Plateau State during what has
been described as a reprisal attack some herdsmen.”
He instructed the military and the
police to bring the violence to an instant end and draw up a plan to
forestall further attacks and reprisal attacks one group against the
other.
The president said he remained
devoted to the sanctity of Nigeria’s unity, urging Nigerians of all
groups to learn to live together in peace and harmony..
He commiserated with the governor
and people of Plateau State as well as those who lost their loved ones,
friends and family, praying that God comfort them.
Tagged: News 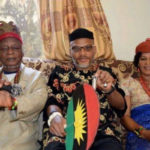 Are you preparing to write JAMB? This is for you

If you don’t want to be arrested, just defect to the APC – New PDP Chairman