Reports have gotten to us that the Nigeria Police Force has released all the arrested suspects in connection with the murder of Eunice Elisha, the  42 year old RCCG evangelist, in Kubwa, Abuja on July 9th 2016.
The  FCT Police spokesman, ASP Anjuguri Manzah revealed that the suspects were released because police investigation could not establish any evidence linking them to the murder of the late Evangelist. Although, the suspects were released on the condition that they will be called up for interrogation whenever the need arises. 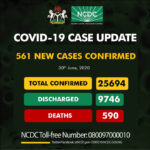 Fulani herdsmen attacked a man in his farmland this morning in Ezeagu LGA of Enugu State.